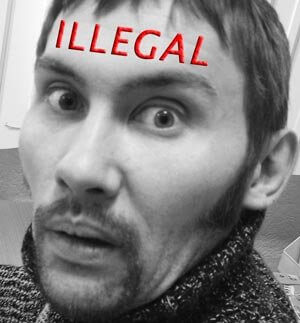 That is right, you cannot extend. You will be issued with a fine when you leave, which you pay when…

Have you been wondering what happens if you are living on an expired tourist visa in Brazil and what to do in that “illegal” situation?

E-mails come to me regularly from numerous foreigners that live or are considering living illegally in Brazil on an expired tourist visa.  And I usually get asked advice on what visa to switch to or apply for or what the consequences for overstaying your tourist visa would be.

And hey, if you’re in this situation, I’m not here to judge you but only help.

So today I will be addressing those questions and advising you on what you can do in this situation including how to pay the fine if you do overstay.

But first, let’s talk about the limits of a tourist visa and how far you can go on one.

What is a Tourist Visa?

A tourist visa allows you to come as a visitor, friend of a Brazilian or unpaid athlete to the country for a maximum of 90 + 90 days per calendar year.

If you are from everywhere outside of Europe, you are allowed to stay for 90 days in a row and then extend it for another 90 days while in Brazil for a total of 180 days.

If you would like to know more about how a tourist visa functions, then I would suggest you take a look at my post “3 Must Knows About a Brazilian Tourist Visa“, where I break down how the days are calculated per year amongst other things.

So let’s say that you’ve been in Brazil for 90 days and then got an extension at the Polícia Federal (Federal Police) for a further 90 days.  The total of 180 days have come and gone and you are still in Brazil, so what happens?

If it wasn’t so easy to stay illegally in Brazil and “dar um jeito” (make a way), then there wouldn’t be so many that did it.

I would never suggest doing anything illegal at all, but I’ve only heard of 1 case of someone being deported and that was due to a rival English school calling the Federal Police on the other school about an illegal gringo teaching.

You can still use your CPF number and live life as you probably did up to then, but getting any legitimate jobs or opening bank accounts wont be possible.

The Old Days of Just Overstaying are Soon Over

Back in the day, staying illegal was one of the most common types of grey area ways of staying in Brazil.  It was almost like everyone was doing it due to the complications and bureaucracy when getting a different kind of visa – I mean who wants to leave Brazil to wait the 6 months (or more) it takes to get a volunteer visa?

So Mr. or Mrs. gringo would just pay their overstay fine at the airport on the way out of the country and just come back when they had “earned” more tourist visa days and repeat the whole process again.

Those days are soon over, the Brazilian government and immigration have announced that they will be clamping harder down on illegals and making it more difficult for them.

We are not sure exactly how this will be implemented or happen but it is a natural step in the country’s development as foreigners and expat Brazilians are flocking back to Brazil in huge numbers due to the opportunities.

On that note, here are some steps you can take as an illegal immigrant in Brazil to become legal:

Tip 1: Pay Fine, Leave and Come Back on a New Visa

The most common course of action for a person who has stayed over their limit is to go to the Polícia Federal at the airport on the way out of the country, pay the overstay fine and figure out another option abroad.

Then once abroad there are a vast amount of different visas to get you back on a more permanent basis such as:

Keep in mind though, that you will need to leave Brazil to apply for a different type of visa as you will have to re-enter as a different visa status (exception: some family Visas as mentioned below).

The fastest and easiest of the visas above is definitely the student visa as it is less bureaucratic and quicker then volunteer visa – though if you can get a work visa then this will be even quicker.

I wrote a post on the 5 best visas to allow you to live permanently in Brazil, you can check it out here.

Tip 2: Start a Brazilian Family and Get a Permanent Visa

Sounds easy enough right?  Well, many single people come to Brazil because of love or couples come with plans on having a child in Brazil.

Let me break them down for you individually:

1: Permanent Visa Based on a Stable Union

If you’ve been in a relationship with a Brazilian for at least a year and can prove this either locally in Brazil or abroad, then you can apply for residence based on a stable partnership.

This is the most common visa amongst the LGBT community but it functions for people in hetorosexual relationships as well.

You will need to prove that you have been in a stable union by getting a testimony from the country you lived in together or from the Brazilian family courts.

Listen to this podcast as I go over the Stable Union visa in more detail.

2: Permanent Visa Based on Brazilian Spouse

If you are married to a Brazilian or considering being married, after the marriage you can go to the Federal Police and apply for your permanent residence irregardless of the fact that you are staying legally or illegally.  This has to do with it being the right of a Brazilian national to be able to live with their spouse.

It is a pretty straight forward process and requires that you pay a visit to the Federal Police office closest to you to ask about the current requirements.

and requirements on how to apply (in Portuguese).

3: Permanent Visa Based on Brazilian Dependent

Is having a child the next logical step in your relationship or marriage as two foreigners wanting to live in Brazil?

Then why not consider having your child in Brazil?

He/she will be granted Brazilian citizenship from birth and then you can apply for permanent residence based on this child.  This is the route that my wife and I took and you can read about how to do this A-Z in the “Giving Birth in Brazil Series“.

Alternatively for couple who would like to be helped through the process from A-Z, I have a setup in Florianópolis to assist with everything from finding housing to getting a great hospital: click on the “Contact Me!” tab above and we can discuss it!

In 2009, then President Luiz Ignacio da Silva, granted about 200,000 illegals Amnesty, where they could be granted a 2 year temporary visa allowing them to become citizens.

This is not something to count on, but if you find that you have been in Brazil for years on an illegal status and have more connection to Brazil then any other place in the world, it could be worthwhile to research and ask immigration lawyers about the next expected Amnesty date.

Though, through the vine I’ve heard that it is granted around 1 time per 10 years.

In the end, the draw to stay in Brazil can be tough to manage as a foreigner with no strong family ties to the country.  So from one gringo to another, I want to encourage you to keep trying, thinking outside of the box and never give up hope – where there is a will, there is a way!

Trust me on this, and I look forward to walking together with you on this journey.

Standing by at your service, and let me know if you have any questions!