Hi Mero, I would start setting up online profiles on freelancer websites (peopleperhour.com, elance.com, upwork.com) and begin building your portfolio.… 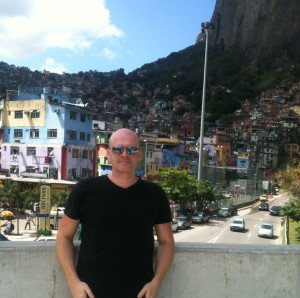 For years I’ve wanted to move to Brazil, but life has always been in the way – until now.

My name is  and I’ve finally set my moving date – over the coming months I’ll be blogging about my experiences as I make the leap to the sunny shores of Florianópolis in Santa Catarina to start my new Brazilian life.

Less than 2 months to go. Time to get organised.

With mere weeks to go before I jump on a Brazilian-bound plane, I’ve started writing lists. Lots of them. Lists help me feel like I have some control over the things that I cannot always control.

In addition to feeling organised, there’s a great satisfaction that comes from ticking things off lists. Paying off credit card debts and closing bank accounts – tick. Resigning from my job – tick. Reserving my first few weeks of accommodation – tick. Booking flights – tick. It’s all starting to feel rather real.

It’s a big deal to shut down your life in one place and to start from scratch in another, particularly when there are so many unknowns on the horizon. Of course, the unknowns are half of the joy. At 36 years of age, I could have just dropped anchor in London and climbed the career ladder. I could have taken out a mortgage and resigned myself to living for the weekend and dreaming of my annual vacation. I could have stayed put as one of the many grey, corporate faces crammed into the tube each morning, hiding behind newspapers.

When I compare a predictable life in London to the ‘what ifs’ of a new life in Brazil, the latter wins every time. Will I be able to make enough money to stay afloat? Will I be able to wrap my head around another language? Where will I live? I don’t have answers to these questions at the moment – but I know I will soon enough.

My love affair with Brazil began over 3 years ago. I flew to the northeast as a stopover on my way to Australia from London. Brazil was an unusual choice for a stopover – well and truly out of the way – but I’d always been curious about the place. I landed in Fortaleza and met up with a Brazilian friend I’d made online. I had no idea of what to expect. I left two weeks later, a little sunburnt and head over heels. I knew I would be back, and I was – many times.

After mulling over facts like Brazil being in recession, or that my savings account is not as full as I would like it to be, I’ve come to realise that there will never be a perfect time to move to Brazil. There will always be reasons to go and reasons to stay. Sometimes you just have to go with your instincts and make a decision. And have enough faith in yourself to know that you’ll find answers to the problems that come your way.

I’ve been working my way through and so far it’s been a godsend. He’s helped me to design a framework for what lies ahead. I now know which visa I’ll be choosing, which city I’ll be living in and where I’ll be studying. I have a pretty good idea of how much money I’m going to need to live well. I know what I should pack and what I should leave behind. He’s even helped me to score a great deal on a flight with British Airways (£250 / US$379 London > Rio return) – a very worthwhile investment.

With the basics mapped out, now I have more time to devote to the next big challenges: ensuring I have enough freelance clients to stay afloat (I work in writing, editing and social media) and of course, . I’ll be blogging about my ups and downs over the coming months in the hopes that my journey provides some inspiration and useful information for others preparing to take the plunge themselves!

Any questions, feel free to hit me up in the comments below.