We all know that a successful lifestyle connected to, or living in Brazil requires that you , though with a jungle of resources out there, it’s hard to know where to start and which dots to connect.

Personally, I’ve been through many different experiences, programs and courses in my quest to learn Portuguese and it was quite a challenge to figure out the best path to fluency.

I tried courses like Rosetta Stone, Pimsluer, a Portuguese language academy, grammar books, memory games – all without success. Although my breakthrough came in an unexpected form.

It was through a series of techniques that I’m going to share with you today.

Having the Confidence to Speak Portuguese

The first problem we have is always in the confidence department… We don’t want to make mistakes in front of natives. We don’t think it will be possible to become fluent and this keeps us from approaching anyone who speaks Portuguese out of fear of failure.

This is partly our own fault but it’s also due to misleading information given by many Portuguese courses out there – they are usually designed by Brazilians who’ve never had to learn Portuguese like us, courses full of grammar and proper language rules. None of them show you the key to getting fluent: having the confidence in yourself that you can do it.

Being a Part of the Portuguese Speaking Community

The whole reason behind learning Portuguese is to be able to communicate with Brazilians and to walk through the doors that will open for you. So why sit at home, when there are plenty of the Brazilian-loving communities around?

I realized how important it was to be part of a great community and that with other people it would be possible. Though, back in 2004, it’s wasn’t as easy to access such communities as it is today. I had to roll up my sleeves, go out and find them myself!

Another great place to find a community of passionate Portuguese learners is through www.meetup.com, communities.skype.com and obviously Facebook Groups.

Focusing on What Works Well to Learn Portuguese

Figuring out exactly “how to learn Portuguese” is no easy task, although after countless tries with different courses one thing is certain: none of them teach the functional side of speaking Portuguese.  Most of them focus on making you learn Portuguese by the book!

Brazilians avoid speaking correctly, so here’s what you can do to save about 40% of your time in learning Portuguese:

In courses and grammar books, they insist on teaching you to say “tú” (you) but the reality is that in Brazil, they only use “você” (except in the far south, but a small area).  This excludes a huge amount of grammar too as instead of saying “tú vais” (you go), you can say “você vai” (you go – but the same rule as above in point 1).

3. Focus on Cognate Words that Transpose Directly into Portuguese

This will unlock lots of instant vocabulary, for example:

4. Learning the Most Commonly Used words in Portuguese First

You can then join them together with the above cognates and simplified grammar, which will give you a huge platform to work off from!

My  will tell you what these words are, and also offers some great bonuses to help you learn Brazilian slang too.

5. Keeping Exposed to Hearing the Language by Watching TV and Movies in Portuguese.

This can be done by either using a VPN from abroad to get access to instant streaming services in Brazil (like Netflix: free access in Brazil if you already have an account!) or by going onto YouTube and finding different Brazilian TV shows and movies.

This is one of the biggest key factors in order to learn Portuguese from abroad as it exposes you to the spoken side and tunes your ear in.

On YouTube, a great way is to find a documentary or movie in Portuguese with English subtitles, or an English speaking video with Portuguese subtitles.

Here is a great happy medium about the history of soccer/football in Brazil:

It has interviewees like Pelé and others and is a mix of both English and Portuguese.

This allows you to hear the language being used in a way that helps it stick better.  If you hear a phrase like “Dias melhores como esses” (better days like this) cemented to a cool rhythm, it will stick in your mind better. BTW: that is an actual sentence from a song I learned back in the beginning of 2005!

I usually recommend finding songs on YouTube, iTunes or my personal favorite letras.mus.br. The latter of the three is what most Brazilians use as it combines the power of YouTube video with the song lyrics and organizes the genres and artists for you.

Here’s how to find some great and FREE songs!

STEP 1: go to letras.mus.br and click on “Artistas” then “Top Hoje” (Top Today) or “Top XXXX” (whatever you want) 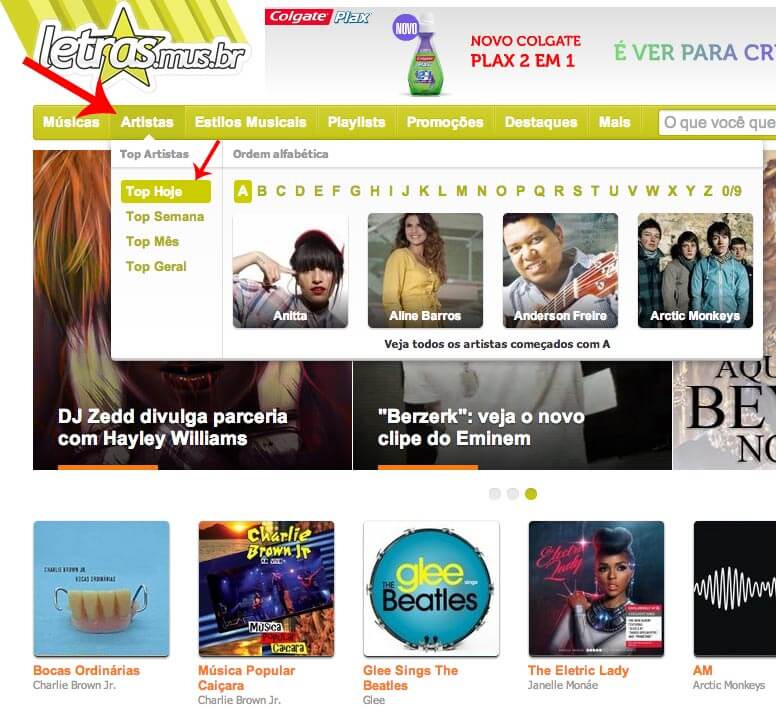 STEP 2: see who’s ranking high and click on them. 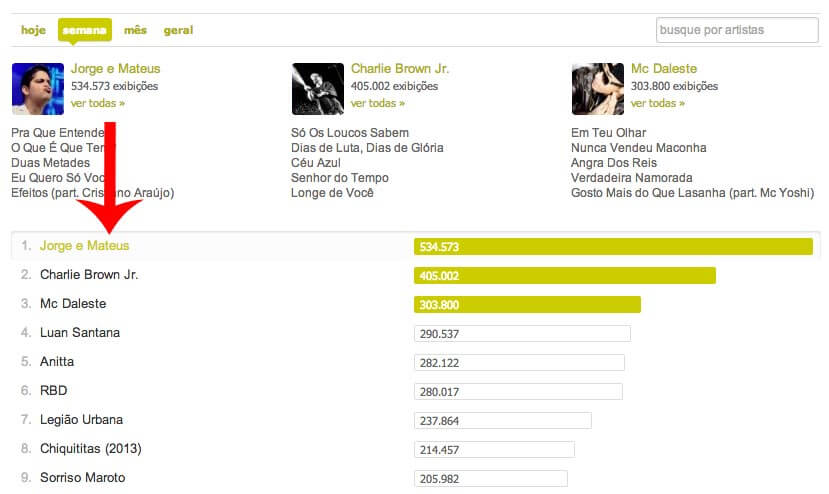 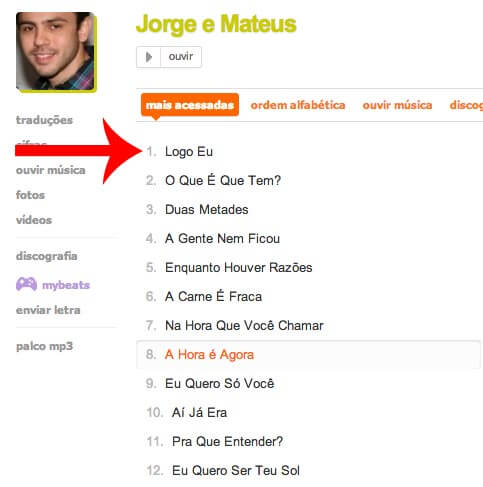 We all love to relax and play games right? Well, if we take the time that we would normally spend shooting zombies, racing in circles (or whatever) and transform it into an experience that satisfies your gamer side but also teaches you Portuguese, then you have a win:win situation here my friend!

A great game is Mind Snacks for the iPad. 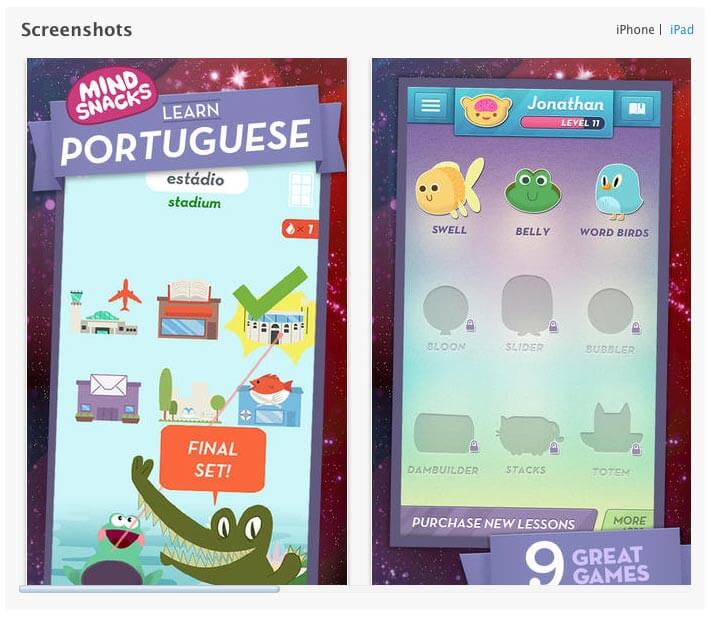 It lets you play several games in the free version that are interactive and let you learn by association, though you have to pay a bit for the premium version.

Body language is roughly 90% of your communication in any language, so it’s important to realize the importance of adapting to Brazilian body language.  There are 6 distinct body language types which I describe in detail in my .

It’s one thing to speak Portuguese words, it’s something totally different to actually learn how to pronounce your words like a Brazilian.  This is something that we as foreigners have a hard time mastering, but never fear as it is possible to train your mouth to speak just like a Brazilian.

My  features some great bonus resources from Idahosa Ness from Mimic Method, which goes into this in more detail.

The best thing I ever did on my Portuguese-learning journey was to let it become a part of who I was. After all, I was learning Portuguese for the specific reason of opening doors and living in Brazil and it was important to be that person that I envisioned.

This type of determination will allow Portuguese fluency to become a part of who you are.  This means that your music tastes may shift more towards your Brazilian side, you’ll probably start following Brazilian soccer/football, current affairs in Brazil become more interesting.

Living it has to do with your whole reason and purpose for learning Portuguese in the first place. Are you doing it because it’s “a neat thing” or because you have a purpose for it?  If you have a good reason for learning Portuguese, then I guarantee that keeping your eyes fixed on that will bring you to your prize. It’s the whole donkey carrot vs. donkey whip metaphor in action. You can whip your donkey to keep walking while he cringes and hates it the whole way through or you can hang a carrot in front of his face so that he is inspired and pro-actively motivated to keep going (maybe giving him a few along the way). Would you prefer sun and samba or boring grammar books?

I can’t stress how important it is for you to become  who wish to live it too -this will really be what puts everything else into the right swing.

Get my FREE Portuguese Fluency Crash Course by !